Grave of the Fireflies Symbolism Analysis

I want to focus mainly on the film's use of symbolism.

Symbolism is found in all types of storytelling, but Miasaki may be the all-time master in the animation department. In this film especially, if any of you guys noticed it, is the use of Setsuko's Fruit Drops.

Let's talk about the Fruit Drops.

Setsuko is 4 years old, while her brother Seito seems to be somewhere around 12 or 14 years old. She depends on him entirely for food, shelter, and comfort. He provides it all for her - kind of. He's only 14, he can't do everything, and the best thing he's good at is taking care of Setsuko emotionally, which doesn't fill her belly. This leads to her eventual death by starvation at the end of the film. Ouch.

If you weren't already struggling with depression....


But if we want to take a closer look at Setsuko and Seito's condition throughout the film, all we have to do is look at the Fruit-Drop Candy, which I believe represents their very dependent relationship (not an unhealthy one! they're surviving and need each other).

This item then is used as a crutch for both Seito and Setsuko. Seito can't always resolve Setsuko's tantrums by himself, and Setsuko is four years old in the middle of World War II. Seito often relies on the sweetest of Fruit Drops to calm Setsuko down, which always works. A scene that really highlights Setsuko's dependency on Seito is when the farmer sells them very very little rice, and on the way home both Seito and Setsuko are frustrated. Setsuko throws a tantrum, and Seito goes over and offers the Candy Tin.


Setsuko begins to cry uncontrollably, but Seito takes the tin and smacks the bottom of it, revealing a melted-together three-piece candy with a few shards of leftovers inside. 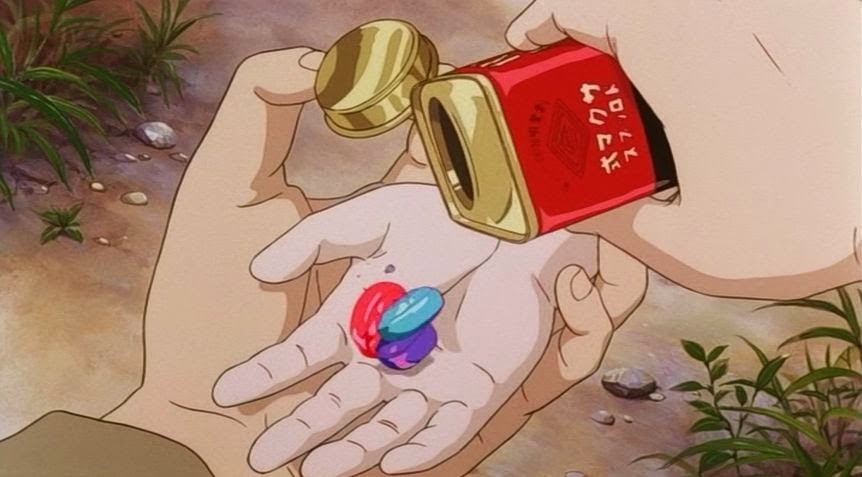 Setsuko is relieved - as is Seito; he can't stand to see his sister upset. Without Seito's help, she wouldn't have calmed down; this translates, through the candy symbolism, as she cannot survive without Seito, and Seito lives for his sister.

When she begins hallucinating about food near the end of the film, Seito finds marbles in her mouth that she believes are fruit drops. 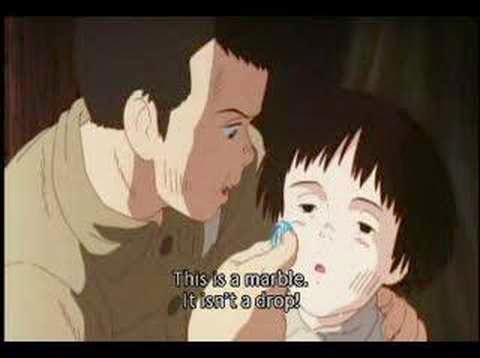 This, again, shows that Setsuko cannot take care of herself - she tried to calm herself down and nourish herself, but she ended up eating marbles and mud-rock 'riceballs'. Seito is the only one who can take care of her, but he comes through a little too late. She dies. Then Seito dies. He couldn't live without her.


Their relationship is heartbreaking, because as an audience we knew from the get-go they were both dead. Throughout the film there was dread in the audience, guessing when the two beloved duo would dwindle and die like fireflies - too young. 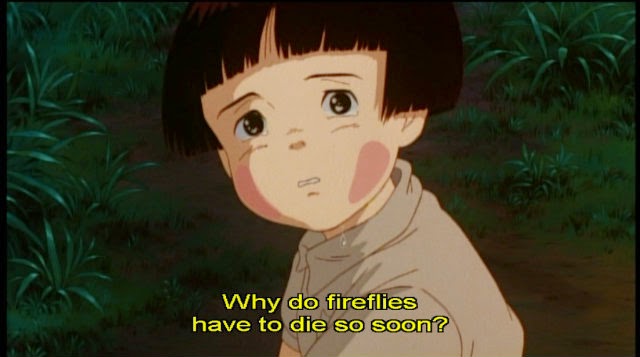 Thank you for reading! If you think differently or have something to add, say so in the comments and we can have a nice discussion!